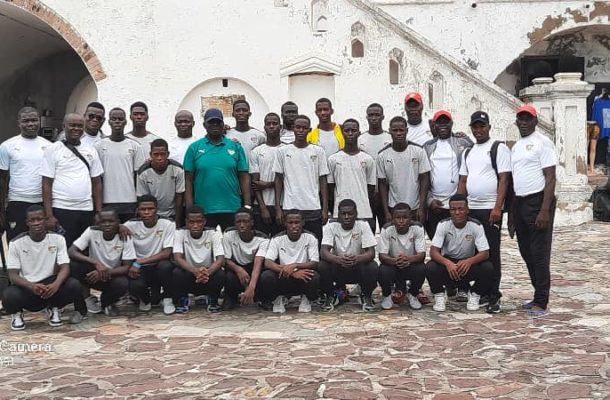 The Sparrow Hawks of Togo have visited the Cape Coast Castle after bowing out of the WAFU B U-17 Cup of Nations in Cape Coast.

Togo exited the tournament on Friday following a 3-0 loss to Ghana at the Cape Coast stadium - adding to an opening Group 3-1 defeat to Nigeria on Wednesday.

The Sparrow Hawks took time off their schedule to visit the Cape Coast stadium hours before leaving the country.
The Cape Coast Castle is one of about forty "slave castles", or large commercial forts, built on the Gold Coast of West Africa (now Ghana) by European traders.

It was originally a Portuguese "feitoria" or trading post, established in 1555, which they named Cabo Corso.

However, in 1653 the Swedish Africa Company constructed a timber fort there. It originally was a centre for the trade in timber and gold.

It was later used in the trans-Atlantic slave trade.

Other Ghanaian slave Castles include Elmina Castle and Fort Christiansburg. They were used to hold slaves before they were loaded onto ships and sold in the Americas, especially the Caribbean. The "gate of no return" was the last stop before crossing the Atlantic Ocean.