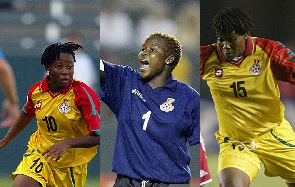 When you look back at Ghanaian Women football over the past few decades, the game has been steeped not only in history but also with a sprinkling of stars.

Ghanaian female footballers that have not only shone on their home continent but on the world stage as well.

These players excelled in the game and made waves across the world.

Their exploits bestowed on the legendary status and they will forever have their names written in the history books of Ghana female football.

Born on May 17, 1979, in Accra, Adjoa Bayor served an attacking midfielder and served as a former skipper of the Black Queens.

She is regarded as one of the greatest female footballers to have ever played for the country.

Her international playing debut started in 2006 when she left Ghatel Ladies in Ghana to join FC Indiana for a season and returned home to rejoined her former side.

The ex-Ghana ace started playing for the Black Queens in 1997 and she was part of the history-making Black Queens side that qualified to their first ever World Cup in the United States.

She was subsequently shortlisted for the best female African player for 2010 which she eventually won beating the likely favourite, Perpetual Nkwocha.

In September 2007 Adjoa Bayor captained the Black Queens at the World Cup in China. Although Ghana did not get out of the group stage, Bayor scored a remarkable goal from a free kick against Norway.

She was a member of the World All-Stars team to play against the Chinese women's national football team in April 2007 at Wuhan, China.

Sackey was one of the best female strikers to have ever played for the Black Queens.

Her goal against Australia in the 2003 World Cup was nominated on FIFA.com for the greatest goal in Women's World Cup history.

Alberta played the Black Queens from 1999 to 2003 and bowed out from the international scene early due to consistent injuries she sustained during her playing career.

Honoured by the Confederation of African Football (CAF) as the Continent's Best Female Footballer of the Year in 2003, Alberta Sackey has consistently played at the top level of the women’s game.

With a rocket-powered shot and a soft-spoken demeanour, Sackey captained the national team in the 1999 FIFA Women’s World Cup and led the qualifying run to USA 2003. Equally at home as a midfield playmaker or on defence if needed, she was the 2002 African Nation’s Cup leading goal scorer with 4 goals.

She spent most of her football career in the USA for Robert Morris College.

Florence Okoe is a Ghanaian women's international footballer who played as a midfielder for the senior women national team, the Black Queens.

She was an influential player for the Black Queens over the decade and enjoyed staggering moments with the National Women Soccer Team.

At club level, she played for Ghatel Ladies and Madonna Ladies in Ghana, and also had Tennis Borussia Berlin

The former Black Queens captain played in the 2003, 2007 and 2011 FIFA Women's World Cup tournaments for Ghana.

The hard-working midfielder who was famed by her swift and constructive distribution of passes has represented Ghana at four African Women’s Championships competitions starting from 2004, 2006, 2008 and 2010.

Mercy Tagoe is a Ghanaian footballer who played as a defender for the Ghana women's national football team.

She played a pivotal role in the history-making Black Queens squad that qualified for their first ever FIFA World Cup in 1999.

On the club level, she played for Bluna Ladies in Ghana.

The former defender has made history for herself by becoming the first ever Ghanaian female Coach to win a trophy.

Mercy Tagoe led the Black Queens team to win the maiden edition of the WAFU Women’s Cup of Nations tournament in Cote d’ Ivoire in 2018 after beating the host nation by a lone goal to clinch the ultimate.

She had previously made history as the first Ghanaian female referee to officiate at the FIFA Women’s World Cup in 2007.

She is currently the assistant coach of the Black Queens.

Arguably, the best goalkeeper ever the female game has produced in the country.

Born on November 4, 1977, Sulemana was a member of the Ghana women's national football team.

Memunatu Sulemana played most of her club football in the country with Fabulous Ladies spent several years with the national team.

She is now the goalkeeper’s trainer for Ghana’s female U-17 team, the Black Maidens.

Patience Sackey is a Ghanaian women's international footballer who plays as a defender.

She was a member of the Black Queens side that made history in 1999 by qualifying the country to its first ever Women’s World Cup and also made a cut in the 2003 team at the World’s Football Mundial.

Her partnership with Mercy Tagoe in 1999 World Cup will stand as the best central defence Ghana can always depend on.

Born on September 1, 1993, Elizabeth Addo is the current captain of the Black Queens and plays as a forward.

She has previously played for Swedish outfit Kvarnsvedens IK

In 2016, Addo was one of three players shortlisted for the 2015/2016 Hungarian Women Footballer of the Year award.

She spent a couple of seasons there and later joined Nigerian giant Rivers Angels F.C. from 2012–2014.

In 2015, Addo moved back to Europe and joined Hungarian giant Ferencvárosi TC in Hungary and won the 2015/2016 Hungarian league title and Hungarian Women's Cup in 2016 and scored 17 goals in 27 games for her side.

Addo has been a full international for Ghana since 2007. At the age of 14, she starred with the under-14 national team at the 2007 FIFA U-14 Women's World Cup held in Switzerland and captained the team to finals and eventually the championship.

She was among Black Queen's team that won the maiden edition of the WAFU Women’s Cup of Nations tournament in Cote d’ Ivoire in 2018 after beating the host nation by a lone goal to clinch the ultimate and also captained Ghana at the African Women's Cup Of Nations held in Ghana but her side could not make it out of the group phase.