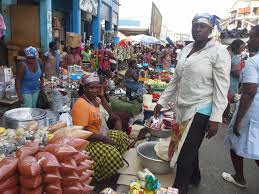 Traders across some major markets in Accra have developed lethargic posture towards Election 2016, saying they have lost trust in most of the political party leaders' ability to transform the country.

The GNA project seeks to ensure gender and social inclusion in national politics and also provide voice for the youth, vulnerable groups, opinion leaders and broader spectrum of the society to contribute to peaceful elections.

The Agency is leveraging its network of journalists and stringers across the country to use its wide network and coverage to provide an effective monitoring and evaluation of political activities.

She noted that politicians only run to the markets whenever elections bells are ringing to promise 'us heaven on earth…We heed their calls to vote for the candidates.

'But these leaders ones in power forget about our plight. This year market women are no longer interested in hearing empty talks. We need evidence based promise.

Ms Nortey said: 'Some of us might not even vote, others will, but we do not really care much about whoever wins because they are all the same and will keep disappointing us.'

Aunty Diana Asiamah, a plantain seller said: 'Much attention is paid in developing other markets but no one cares about us in Malata'.

She said market women and traders in general are gradually losing political interest due to the attitude of some politicians.

Madam Kubura Nassir, a Waakye seller at the Texpo Market in the Tema-West Constituency called on political parties to consider the interests of traders.

Madam Oboshie Torgbor, Okro seller at the Mallam market, said: 'I will only vote because it is a duty and right to do so and not because of the numerous unfulfilled promises by politicians.'

Madam Anita Bentum, a trader who deals in groceries at Mallam Market said she will not vote in this year's election as a result of the lack of development at the market.

She explained that the market lacks some basic amenities and until that has been provided, she would not vote.

The views of traders were solicited at Makola Market; Kaneshie Market and Dansoman Market who also expressed similar sentiments.