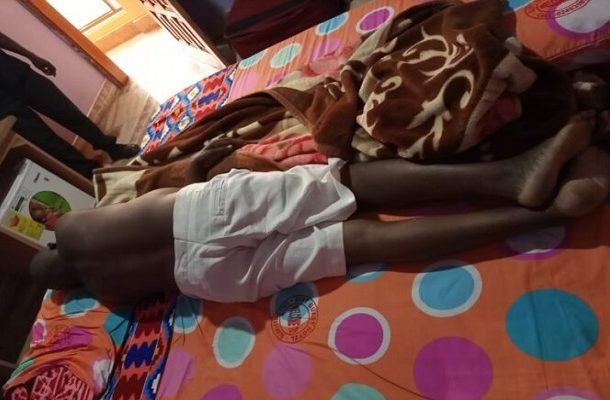 The man lying dead in the hotel room

A 66-year-old man believed to be a traditional ruler has been found dead at a hotel room in the Eastern Regional capital of Koforidua.

The man who gave his name as William Agyei reportedly died in a suspicious circumstance while having sex with a lady in her mid-twenties.

Confirming the incident, the receptionist Adom Guest House said the man checked in on Saturday, December 19, 2020, with a lady believed to be 26 years.

According to her, they came onboard a red Toyota Corolla saloon car, with registration number ER 1614 -17.

She narrated that on the next day (Sunday), in an attempt to clean the room, she knocked several times but there was no response so she opened but to her astonishment, the man was lying on the bed lifelessly.

However, the lady who checked in with the man had suddenly disappeared, she said.

The receptionist said they informed the police who came to the scene. She revealed disclosed that one viagra for men, Deep heat spray, Unirob polar ice gel, bendroflumethiazide tablets and other sex-related medication were discovered from a red echolac bag belonging to the deceased.

Cash of Two Thousand Ghana Cedis (GHC2,000) according to the receptionist was also found in the said bag.

He also carried regalia and traditional sandals, indicating he could be a chief, she said.

The said items and the car, she says have since been taken to the police station  Effiduase police while the body has been conveyed to  St Joseph’s Hospital Morgue awaiting identification and post-mortem examination.