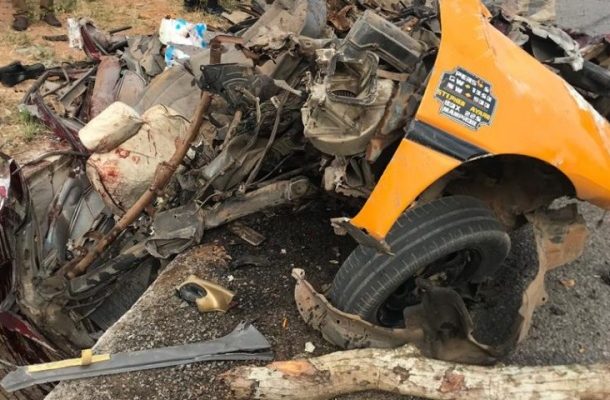 Four family members commuting on a taxi cab with registration number GR 7277 – 09 have been crushed to death by a tipper truck at Anoff, a community in the Nsawam-Adoagyiri Municipality of Eastern Region.They died instantly, including the driver.The deceased have been identified as Nana Brenpong Boateng also known as ‘Bawasty’; Badatu, Okoro, and Honorable.The taxi cab was travelling from Nsawam heading to Adeiso when it was crushed and run over by the truck with registration number GN 7830 – 16, which was travelling in the opposite direction.The taxi cab was dismembered, puckered and concertinaed beyond recognition and repair.The Commander of the Nsawam Police Station, Superintendent Marian Owusu, said the tipper truck driver, who was seen talking on his mobile phone as he approached Anoff, lost control of the vehicle and run over the taxi cab on the other lane.The police had blocked one side of the road to allow heavy-duty vehicles to be weighed.The bodies of the deceased have been deposited at the Nsawam Hospital morgue while the truck driver is in police custody to assist with investigations.