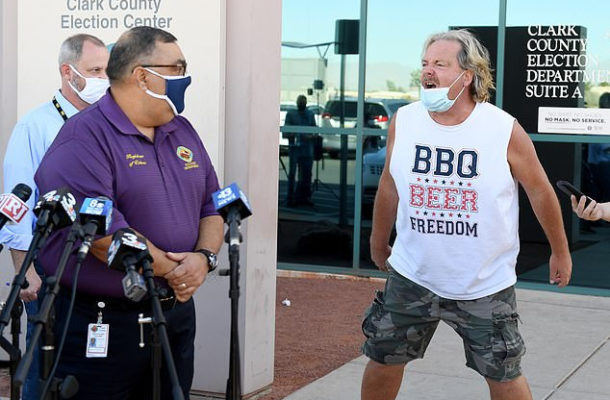 The man, who was shouting so loudly his face mask dropped below his chin, appeared behind officials in Clark County where votes are still being counted in the US presidential race.

Registrar Joe Gloria had been giving an update on how many votes were left to be tallied when the man interrupted to repeat conspiracy theories being peddled by the Trump camp.

While constantly jabbing his finger at crowds of reporters, the man rages: “The Biden crime family is stealing this election. The media is covering it up.”

Apparently expecting to be dragged away shouting, the man then appears confused about what to do next after being allowed to make his point unchallenged. He proceeds to meekly turn away from the cameras and walks off as if nothing had happened.

Despite providing no evidence, Donald Trump claimed late on election night that the contest has been hit by ‘fraud.’ This has led his supporters to stage angry protests outside counts in various states.

The protestor’s antics have been mocked on Twitter. One reporter said: ‘He wanted to get tackled so badly, nope, just enjoy this sad walk.’ Another said: ‘I would expect nothing less from someone wearing a tank top that reads “BBQ, Beer, Freedom.”

Others shared links of where to buy a similar shirt online while more than one remix of the man’s rant appeared within hours. Clark County in Nevada is still counting votes in the presidential race. It could hold the key to Joe Biden becoming president.

The area, which includes Las Vegas, is expected to favour the Democrat. On Thursday morning 84% of votes had been counted, with Biden leading in the county by 52.9% to 45.4%, according to the New York Times. In Nevada as a whole, Biden’s lead is wafer-thin with just 8,000 votes between the two candidates after 86% of votes counted.

It means these final few votes will decide which side the state backs. Biden has been projected to win 264 electoral college votes so far meaning the six votes up for grabs in Nevada could be the key to getting him to the 270 needed for the presidency.

Election officials have said results will be updated at noon eastern time on Thursday. Remaining votes include mail-in ballots received on election day.

Trump has to win the states where he is still ahead – Georgia, North Carolina, Alaska and Pennsylvania – plus either Arizona or Nevada to triumph and avoid becoming the first incumbent U.S. President to lose a re-election bid since fellow Republican George H.W. Bush in 1992. It has long been feared that he would seek to undermine the credibility of the voting process if he lost.

Since Tuesday’s Election Day, he has falsely declared victory, accused Democrats of trying to steal the election without evidence and vowed to fight states in court.