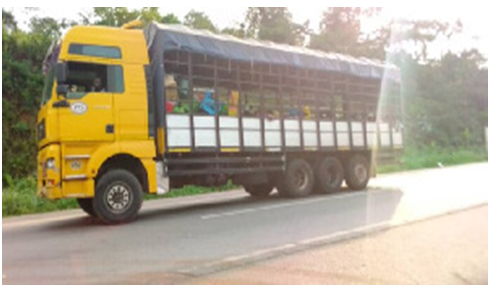 The Ghana Immigration Service (GIS) last week intercepted two cargo vehicles that had onboard a total of 67 passengers, out of whom 17 tested positive for coronavirus.

The vehicles were intercepted in the Oti Region, precisely in Nkwanta.

This was revealed by President Nana Addo Dankwa Akufo-Addo on Sunday, April 26 when he addressed the nation in a televised broadcast.

It was his eighth nationwide broadcast on the measures taken by government in the fight against coronavirus.

Since his first address on Wednesday, March 11, when Ghana had no cases yet of the deadly coronavirus, there have been 1,550 confirmed cases with over 100,000 tests conducted.
Some of the cases involve West African nationals, who are supposedly aided by Ghanaians into the country.

“These are unpatriotic acts and must stop,” President Akufo-Addo warned.

“We cannot allow a few persons who are motivated by their own selfish money-making interest to endanger the lives of the rest of the population.”

The president had ordered the closure of Ghana’s borders to human traffic on Sunday, March 22 and on Tuesday, April 4 extended the closure by two more weeks, though he has been insistent in his later broadcasts that it is “until further notice”.

He had also imposed a partial lockdown in the country with Accra, Kumasi, Kasoa and Tema affected.

This was lifted on Monday, April 20.

It was during the period of the lockdown that the two cargo vehicles transporting the 67 to the Oti Region were intercepted.

“All of [the passengers] were tested with 17 proving positive.”

The number shot the Region, which until Friday, April 24 had not recorded any case of Covid-19, to fourth on the regional chart.

It is the new region with the highest number of confirmed cases. Only Greater Accra, Ashanti and Eastern regions have more cases.

President Akufo-Addo said the fight against the disease is not yet over.

“Clearly, we still have some way to go towards ridding ourselves of the virus.

“The truth is that this will be a long war broken up into several battles.”
Source: 3news.com