U-Turn : I was misquoted about champions league not our level comments - Kjetil Zachariassen 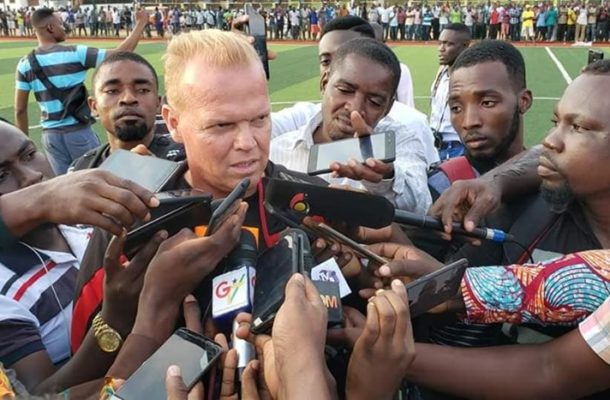 Under fire Kumasi Asante Kotoko gaffer Kjetil Zacchariassen has made a massive u-turn following backlash about comments he made after Asante Kotoko were eliminated in the Champions league by Tunisian giants Etoile du Sahel in Monastir.

The porcupine warriors traveled to Tunisia with a healthy two nil lead but tamely succumbed to a three nil defeat in Tunisia without a fight despite playing for 12 minutes with a man advantage.

After the game coach of the side speaking in a post match interviewed posited that the champions league is beyond Kotoko's ability and that their real level is playing in Caf second tier competition the Confederations Cup.

However, in an interview with Light FM in Kumasi, Zachariassen emphasized that his comments were misquoted by the media.

“It’s never true I said Kotoko’s level is not in the Champions League, it’s way out of proportion probably people took me out of context. I said the level now because we are in the Confederation Cup, we will fight hard and maintain total focus on it without focusing on the Champions League.” He explianed.

Kotoko will know their opponents in the knock out for the group stage of the Caf Confederations Cup on Friday.