UGMC opened to the public, nurses report to duty 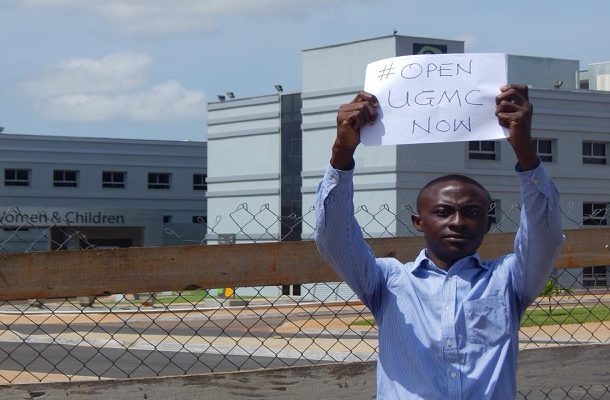 The much-talked about University of Ghana Medical Centre (UGMC) has finally been opened to the general public on Wednesday July 18, 2018.

At least the facility has been kept unused for about 18 months after it was constructed by the erstwhile Mahama administration.

According to report, the facility is impressive and “will impress you if you visited”.

The report added that staff of the facility, including nurses are at work and are testing the equipment.

The interim head of the committee that worked on the opening of the hospital Dr. Asamoah Baidoo said the hospital will  provide a conducive atmosphere for patients.

In the meantime, the facility will only attend to referral cases.

The opening comes after intense public pressure and the eventual arrest of a final-year Pharmacy student of the University of Ghana, Reginald Sakyi Brown for peacefully protesting the delays in opening  the facility.

Sakyi-Brown, who was on a campaign to have the  Centre opened for operation raised a placard bearing the inscription “Open UGMC Now” at a sod cutting event at the Korle-Bu Teaching Hospital being addressed by the first lady Rebecca Akufo-Addo.

The $217 million edifice had remained closed since its completion. A tussle between the University Authorities and the Ministry of health over who has the right to manage the facility  protracted the opening of the facility.

The 650-bed facility is the first of its kind in West Africa and second to only few hospitals in South Africa. The then Government secured a loan facility from Harpo Alim Bank of Israel for the project.

Meanwhile, Parliament has approved a 47 million Euro loan for the completion of phase two of the project. The phase two will equip the hospital with facilities such as a VIP maternity and private floor, Cardio-vascular and Open heart surgery unit and a neurosurgery unit.