University of Education donates to three institutions at Winneba 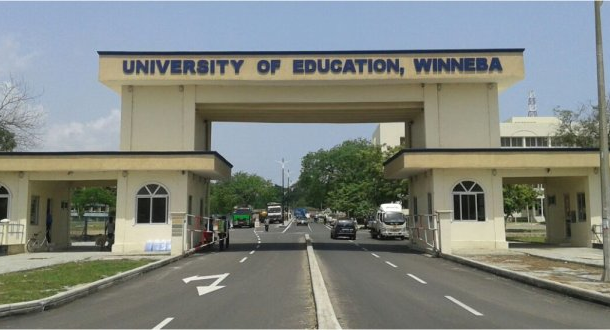 The University of Education, Winneba has made a donation to three institutions in the Efutu Municipality of the Central Region.

The items presented were a chest freezer and five ceiling fans to the Prisons Service, two desktop computers and a printer to the Police Service and two packets of roofing sheets with ten bags of cement to University Practice Primary "C".

Presenting the items to the institutions, the Vice Chancellor underscored the importance of the University having a powerful relationship with the community.

The Vice-Chancellor made the comments at a short but brief ceremony to donate items to the Ghana Police Service, Ghana Prison Service and University Practice Primary "C" all in the Effutu Municipality.

“The University recently donated fifty thousand cedis (GHC50, 000.00) to the Effutu Municipal Assembly to provide street lights so as to boost security in the community and also ensure that about 30 of the 121 recently secured financial clearance from the government for employment were qualified indigenes of Winneba,” he said.

He averred that the University has activated and sustained the growth of several local businesses such as taxi, restaurant, salon, hostel, provision shops, and stationery among other services to boost the employment opportunities in the operational area of the university.

“The University has ensured that about 80% of its supplies are from local businesses. That is a demonstration of our commitment to our relationship with them,” he said.

The Registrar of the University, Paul Osei-Barimah Esq, said the University was not an Island, hence will continue to be in constant touch with the communities, decentralized departments, agencies and units in the Municipality.

He indicated that it was through such interactions that brought to light some of the needs, concerns and request by the agencies.

He intimated that though the donation is not much, the intention and goodwill is genuine and hoped that the impact would be felt to enable them to nurture and grow the relationship with the various institutions.

The District Commander of Police, Godfred Adjirakor on behalf of the donee institutions thanked the University Management for the kind gesture and promised to put the items to good use. He further called for more support from the University and other well-meaning organizations.