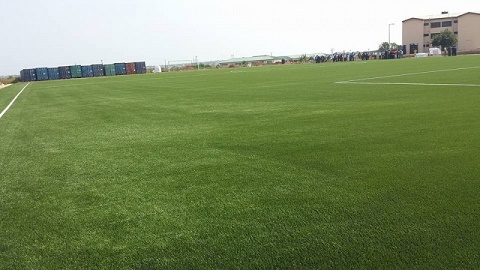 The Ghana Football Association has selected the Upper West, Upper East and Brong Ahafo regions as the first areas for the construction of ten  football pitches  across the country by StarTimes.

According to a statement released Friday by the football governing body, executives of the premier league sponsors StarTimes were invited in the meeting were it was decided that the planned projects be constructed as soon as possible.

The statement further explained that some regional FA's were still in talks with landowners to secure plots for the pitches while some have already secured these lands.

"The Executive Committee approved the proposal of the President for the sod-cutting ceremonies for the construction of the ten StarTimes pitches to begin over the next few weeks. StarTimes’ leadership in Ghana were invited to the meeting and also agreed with the Executive Committee to get the project underway as soon as possible. The first team regions targeted are Upper West, Upper East and Brong Ahafo regions as they are in dire need of these pitches to foster the development of the game. Some Regional FAs have already secured the lands for pitches while some are still in talks with landowners" the statement read.

The meeting thus highlighted the need to begin the project with the Upper West, Upper East and Brong Ahafo regions as they in dire need of these pitches for the development of the game.

Meanwhile the 24th Ordinary Congress of the Ghana Foogtball Association has been scheduled for the 7th and 8th of February at the Ghanaman Soccer Center of Excellence in Prampram.