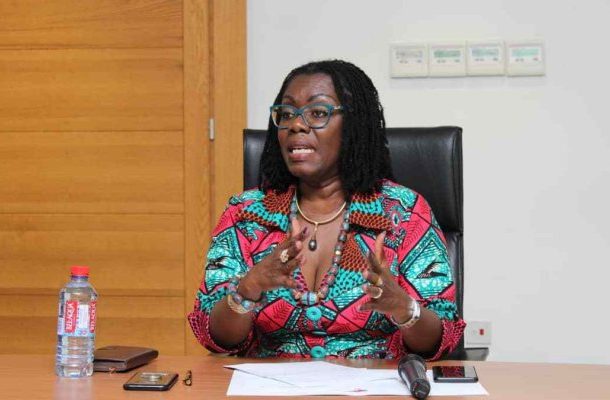 According to her, trainee journalist should not be sent to interview anyone or interact with senior officials without supervision.Sanitation Minister Cecilia Dapaah came under intense criticism after she told off an intern of Accra-based Adom FM, Rahinatu Abdul Bach on the phone for calling her to grant an interview.The minister said the young lady’s request for an interview was disrespectful of her as a state official and her office as well because she was an intern.“Who gave you the permission to call me to speak to me directly like that?” the Minister queried the Ghana Institute of Journalism student.“You don’t respect … please go off”, she said as she dropped the call.The intern had been directed by her editor, Mr Samuel Dowuona to get the ministry’s reaction to reports that some persons caught littering were ordered by either the police or ordinary citizens to clean the streets as punishment.A group calling itself the Concerned Interns in Media (CIIM) have called on the minister to apologise.Reacting to the development in support of her fellow minister of state, Mrs Owusu-Ekuful said: “A minister is not the training ground for an intern.”In a Facebook post, Mrs Owusu-Ekuful said: “This chronic disrespect for political officeholders in Ghana is getting quite nauseating”, adding: “Try getting into the office of a minister anywhere in the world without an appointment and see if you'll be allowed in”.In Ghana, the Ablekuma West MP continued: “The minister will be roasted because they are public officers, so, should be at everyone's beck and call. You can't just pick up the phone and insist on an interview without prior arrangement and the media house must send the appropriately trained personnel to conduct the interview. An intern must be supervised by a superior when out on the field to ensure they acquire the right on-the-job skills. Even as a qualified lawyer doing my pupillage in Akufo-Addo, Prempeh & Co., I was supervised by a senior lawyer and never let loose on my own to deal with clients for fear of making mistakes that might cost the firm”.“That’s how you learn (and you should never be so arrogant as to think graduation from school gives you all the skills you need to work). That’s what serious organisations who value their corporate reputation do. And they apologise when they step out of line instead of blaming those who insist on the right thing being done. An intern or trainee should not be sent to interview anyone or interact with senior officials without supervision.“A minister is not the training ground for an intern”, Mrs Owusu-Ekuful stressed, noting: “You crawl before you stand and walk”.“If you can’t invest resources in providing them with the proper practical skills, don’t take them in”, she suggested.“And, yes, ministers and senior officials can and should insist that the right trained personnel who understand their job and know the implications of their actions alone should interact with them. There is nothing wrong with that. Thank you Hon. Cecilia Abena Dapaah for calling the young intern out and reminding the media house which committed this faux pas of some basic tenets of their profession.“In these days of fake news and chronic misreporting, it is critical that we do not expose our public officials to ridicule just because some budding journalists want to make headlines.“Maybe, we are no longer interested in accurate reportage and any soundbite or noise will do, but in the final analysis, quality work will always stand out and be rewarded. It pays to take time to learn well and acquire the right skills in any profession, including journalism. I salute Paul Ansah, Sefa Kayi Sakyi-Addo, Afenyi-Dadzie et al…”