US medics vow never to return as St. Joseph Hospital seeks to rip off their patients 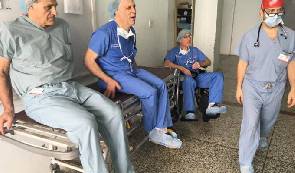 The St. Joseph Orthopaedic Hospital at Koforidua in the Eastern Region was only supposed to host Operation Walk Syracuse, a US medical charity that was in Ghana in April to conduct free knee and hip replacement surgery for some 50 shortlisted Ghanaians who suffered from various forms of joint arthritis.

But in a typical Ghanaian ‘ways and means’ fashion, the local staff at the hospital immediately saw an opportunity to cash in on the situation, and so they breached the contract they had signed with the US charity.

Weeks before the US team of surgeons arrived, the local medical staff at the St Joseph hospital asked the beneficiary patients, who had been screened to undergo the free surgery, to go make ready GHC6000.00 each.

The patients, drawn from various parts of the country, went home with their families and scurried around, trying to raise the money.

But most of them, coming as they were from low income families, could not raise the full amount when the day of the surgery arrived.

Some of them thus paid to the local medical staff, on the blind side of the US team, whatever amount they were able to raise, with some promising to make full payment by the time the surgery was over or before they were discharged.

Fortuitously, as it turned out, one of the patients, who could not raise the full amount, pulled the plug on the local medical team; the patient, whose part payment had been rejected, is said to have walked up to a local doctor, who was in discussions with a US team member, to plead for ‘mercy.’

Conscious that the expatriate doctor could catch wind of the ploy, the Ghanaian doctor, the B&FT learned, scolded the patient, telling him the surgery was for free and that he should leave the scene.

But it was too late; one thing led to the other, and the US team eventually discovered to their utter irritation, that the Ghanaian team was hardly interested in the superior joint replacement technique they had brought, but was only interested in ripping off the poor patients.

If the plan had succeeded, the hospital would have made a cool GH?276,000 off the 46 patients who eventually benefitted from the surgery.

But even when a crisis meeting ensued, after the US team had threatened to abandon the mission, the hospital still ended up taking between GH?1000.00 and GH?500.00 from each patient.

“Actually, they [the patients] were charged GH?6000.00 of which we had no idea,” Kimberley Murray, a senior nurse and administrator who led the Operation Walk Syracuse team to Ghana told the B&FT at the St Joseph hospital on April 20, 2016.

“We have a contractual relationship with the hospital which says there will be no monies paid; we do this one hundred percent free of charge and no financial demands can be made on the patients.

So as soon as we found out about that we had an urgent meeting with the hospital administration and we reminded them we have a signed contractual agreement that this would be free of charge,” she said.

Whilst B&FT’s investigations revealed that the local medical staff refunded the monies without GH?1000.00 from each patient, the US team said the agreement reached after the meeting was for the hospital to retain GH?500.00 on each patient.

“There was much internal discussion here, to the point where we almost stopped and left because I have 29 people with me who have left their jobs and their families and we prepared for six months getting donations and equipment supplies, and we have incurred the cost of a trailer here, because our mission and our goal is to do free surgery for people who are in need. So if that can’t happen, as sad as it is, we will not and cannot work with countries or hospitals that can’t support our mission,” Kimberley Murray said.

Sickle Cell eating away at many Ghanaian bones

Arthritis, a joint-condition, is known to be more prevalent in aged people, but the visit of the US medical team brought to light a more worrying development.
The doctors found that in Ghana, because many people carry the sickle cell anemia genetic abnormality, which causes an erosion of the hip bone, a lot of people in their twenties and thirties are presenting with arthritis.

Indeed, most of the cases the Operation Walk Syracuse team worked on were younger patients, but an even larger number of such patients did not make the initial 50 shortlist and their hope was that the doctors would return some time in the future.

“In the United States, much of the need for hip and knee replacement relates to the arthritis associated with aging…in other parts of the world such as Ghana, there are diseases and situations that cause the destruction and the breakdown of bone at a very young age,” Kimberley Murray said.

Sickle cell disease is endemic in your country, and it causes a condition called avascular necrosis that particular attacks the hips at a very young age. And what it really does is deprive the hip area of blood supply and causes your femur or thigh bone to wear away,” Kimberley Murray explained.

So when we come, we bring between US$3million and US$5million of donated hip implants. The parts to do a hip replacement cost about US$5,000 to US$7,000, and knee replacement even more. So that is one of the limiting factors in places like Ghana, Nepal, India and some of the Central and South American countries,” she said.

On its facebook page, Operation Walk Syracuse wrote: “Turns out... there is basically no elective joint replacement service available in rural Ghana, a nation of around 25 million people.

There are orthopedic trauma hospitals, but no real resources for joint-related pathology. Which makes the joint replacement services that we are providing - free of charge, to any and all candidates - incredibly rare. And also means we are likely only scratching the surface of the orthopedic services that are needed here.”

The facebook post added: “As one of our most experienced surgeons noted yesterday during our Screening Clinic: ‘In Ghana, you could see a year's worth of Joint Fellowship pathology in about two weeks.’ The hits just kept on coming.”

Three months after the surgery, recovery has been so fast for the 46 beneficiary patients, who cannot believe that they have been saved from the excruciating pain that had confined them indoors.

“I used to be in so much pain. I could hardly go anywhere because after walking a little I got so tired and felt so much pain,” one of the patients told the B&FT.

“I don’t know what I would have done; I don’t know what would have happened to me if these people had not come here to save us in this selfless manner. It is sad that the controversy happened, and I can only pray that they return for others to benefit from their self-sacrifice,” the patient said.

Operation Walk Syracuse is only one of 13 different teams, based in 13 different US cities, of a not-for-profit, volunteer medical services organization, which provides free surgical treatment for patients in underserved parts of the world.

The Syracuse city team which visited Ghana, at the instance of Vitamilk’s Child Malnutrition Foundation, has done similar free surgery in Nepal and other deprived countries, and according to Kimberley Murray, nowhere in their travels had they encountered so much disappointment.