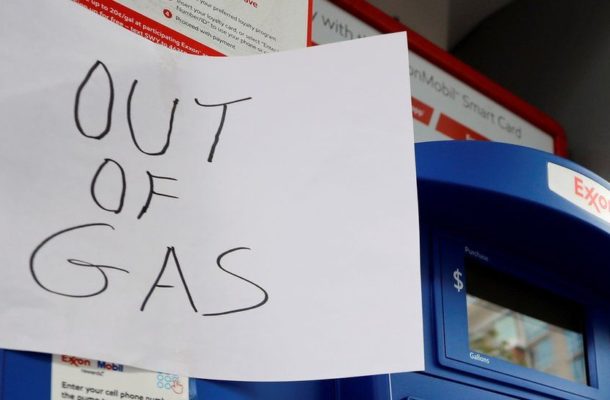 The United States government has offered a bounty of up to $10million (£7.4m) for information about the hacking group known as DarkSide.

In May, a DarkSide ransomware attack shut down a vital 5,500-mile-long fuel pipeline on the east coast of the US.

The pipeline carries 45% of the fuel used on the east coast.

The bounty is offered for information that can lead to the “identification or location of any individuals” in a leadership position with DarkSide.

A separate $5m reward has been offered for information leading to the arrest of anybody “conspiring to participate” in a DarkSide ransomware attack.

The cyber-attack caused fuel shortages after the Colonial Pipeline company shut down its operations for several days.

It eventually paid the $4.4m ransom in Bitcoin.

The BBC is not responsible for the content of external sites.

However, US authorities later said 63.7 Bitcoin, the majority of the ransom paid by Colonial Pipeline, had been recovered.

$10m is the largest bounty ever offered for the arrest of a specific cyber-criminal.

The ignominious record was previously held by Maksim Yakubets, the alleged mastermind behind another ransomware gang called Evil Corp.

The US named and shamed him (along with help from the UK authorities) in 2019.

Before that, the record bounty stood at $3m for another alleged cyber-crime boss called Evgeniy Bogachev.

The thing these individuals have in common?

They are thought to be living care-free lives in Russia safe from any prospect of arrest from the local police, who routinely ignore western accusations against Russian hackers.

Even with their names, pictures and a rough location published by the US, these alleged criminals are safe.

The US seems to have even less to go on in terms of unmasking DarkSide’s leaders, although most research suggests they are also in Russia.

So, despite the eye-watering sums being offered by the US, the chances of these criminals facing justice are slim.