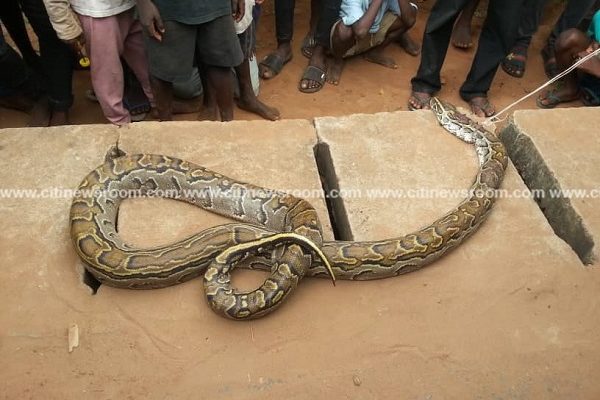 But for the timely intervention of Eklu Awayi, a native of Dzodze Awayikorpe in the Ketu North Municipality of the Volta Region, his daughter and wife would have been devoured by a massive python in their farm.

Narrating the incident, the 38-year-old man said he was on his farm with the wife and less than a year old daughter when he heard unusual screams from the baby.

Alarmed by the screaming he rushed to the scene to meet a long python of about 4 meters about to swallow his baby.

He said he tried to fight off the animal but it coiled around him. In a struggle, he managed to hold the neck of the animal and tied it with a rope to over overpower it.

Eklu was grateful to God for saving the lives of his family and recounted how fear gripped him at the sight of the scene.

Residents of Dzodze were thrown into a state of shock and fear when the warrior coiled the dead python around his neck and brought it to the central business area.

After the triumphant display, he later went to the St Anthony’s Hospital with his family for medical checkup.