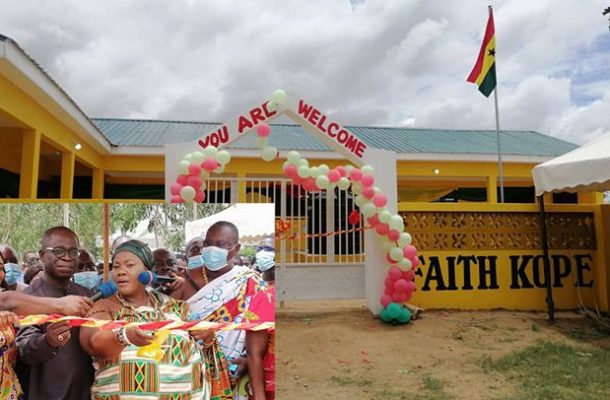 Eighteen out of 50 new school projects to be constructed within six months are due for commissioning, the Acting Executive Director of the Valco Trust Fund, Kelvin Kwaku Yeboah, has announced.

Mr. Yeboah said the new school blocks are part of an initiative to eliminate “all schools under trees and the reconstruction of all deplorable school structures” in every part of the country.

Speaking at the commissioning of one of the projects at Faithkope D/A KG School in the Ada East District of the Greater Accra Region, Mr. Yeboah stated, “I wish to inform you that apart from this school, eight other schools in the Bono, Bono East, Ahafo, Upper West, Oti, Volta, Upper East and North East regions are also completed and will also be commissioned within the next two weeks.”

He said the remaining nine schools, which are in the Ashanti, Savanah, Volta, Eastern, Western, Western North, and Northern regions, would be completed by the end of October this year.

The Valco Trust Fund boss disclosed that his outfit had been able to “raise some additional funding” and that on November 15, 2021, the construction of the second batch of 32 schools would also commence.

He appealed to GETFund to make some budgetary allocation for the maintenance of the educational infrastructures in the country, asserting, “if not, we will build these beautiful schools today, but in the next few years these schools will become so deplorable that we will have to spend additional money to build it again.”

The Deputy Minister of Energy, William Owireku Aidoo, said over the years the Fund had been assisting both the second cycle and tertiary institutions with various educational facilities.

“Some of these include buses and trucks, books for several libraries, home science equipment, science laboratory equipment among others,” he stated.

According to the Deputy Minister, in pursuance of its mandate and in consultation with stakeholders, VALCO Trust Fund and the Ministry of Energy have been leading the charge in getting schools under trees eliminated.

“The extent of these schools under trees and the deplorable school structures are in extremely dire straits and it’s very prevalent in all the regions of our country,” he stressed.

The newly built two-unit classroom block at Faithkope D/A KG School has a canteen, washrooms for both male and female pupils as well as the headmistress, and two poly tanks.

The school, which has a playground, is fully connected to the national electricity grid, with both the classrooms and the canteen furnished.

“The rationale behind the policy was to provide a framework for Ministries, Departments and Agencies (MDAs) to meaningfully contribute to the growth, development and survival of the child,” he stated.