VAR: Video assistant referees will be used at 2018 World Cup in Russia 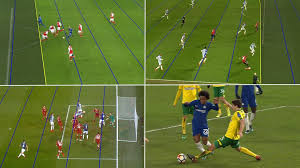 Video assistant referees will be used at the World Cup for the first time after Fifa formally approved the technology for this year's tournament.
VAR has been trialled in some domestic English cup games this season, and has been used in Germany and Italy.

"We need to live with the times," said Fifa president Gianni Infantino.

"We wanted to give the referees tools so they can make better decisions, and in the World Cup some very important decisions are made."

He added: "It's not possible that in 2018 everyone in their living room knows a few seconds after the play whether a referee has made a mistake and the referee doesn't."

VAR was first used at the Club World Cup in December 2016, and trialled in the 2017 Confederations Cup.

The system was described as "comical" and "embarrassing" after Tottenham's 6-1 FA Cup win over Rochdale in late February, when a goal was disallowed and a converted penalty overturned.

The Premier League is not expected to introduce VAR next season, and Uefa has already said it will not be used in the 2018-19 Champions League.

Spain's La Liga and France's Ligue 1 are to introduce it from next season, while the Bundesliga will decide on 22 March.

"I was sceptical at first, but without trying you cannot know what it's worth," Infantino added.

"Without VAR, a referee can make one important mistake every three matches. With VAR, the figures we have seen from the trials that have been held show that a big mistake is made once every 19 matches."

The world governing body's formal announcement comes after the International Football Association Board (Ifab) "unanimously approved" the introduction of VAR on a permanent basis earlier this month.

Ifab is made up of Fifa and the Football Associations of England, Scotland, Wales and Northern Ireland.

Each FA has one vote to Fifa's four, with six votes required for a change in the laws.

The body made the decision to approve the technology following the results of independent analysis conducted by Belgian university KU Leuven.