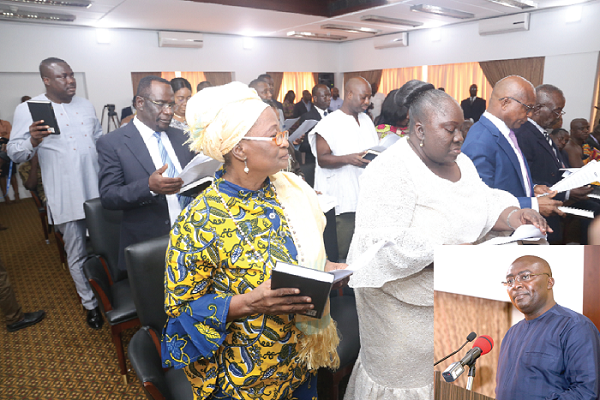 Vice-President Mahamudu Bawumia has inaugurated the 15-member Local Government Service Council, with a charge to the members to up their game as a crucial strategic partner to the government in its growth and development agenda.

According to him, the members had been appointed to office at a crucial time in the nation’s history when the need for the Public Service in general and the Local Government Service in particular to play defined roles had become imperative.

That strategic role and function of the Local Government Service called for a review, introspection, correction and repositioning to achieve set objectives and core functions, the Vice-President pointed out.

The Vice-President said the council was obliged to give the President good and honest advice on administrative decentralisation and give strategic direction to the Local Government Service in the deployment and management of human resource to ensure that all MMDAs had the skills mix of staff needed to develop them.

He stressed the need to ensure that the implementation of human resource policies was fair to all and devoid of favouritism, adding that it should also ensure that the Local Government Service remained committed to its core values of professionalism, objectivity, integrity, accountability, impartiality, neutrality and customer sensitivity.

He was also hopeful that members of the council would use their rich experiences to help the state develop better and effective multi-sectoral cooperation with other services, departments and agencies for better appreciation and the smooth implementation of government priority programmes.

Speaking on behalf of his colleagues, Mr Owusu Ansah expressed gratitude for the opportunity to render service to the country.

He said the council was prepared to work to fast-track the effective administration and management of the decentralised system, saying that had been the expectation of governments in the past four decades.