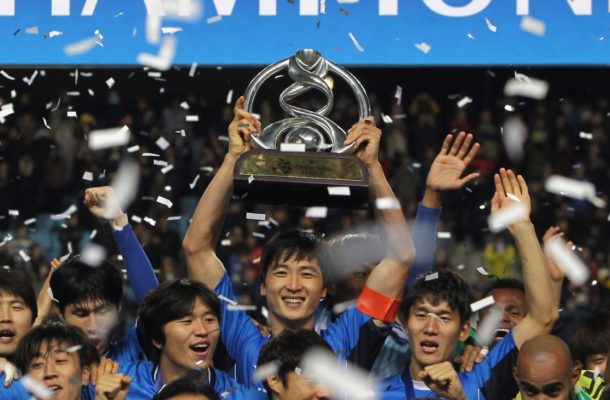 Changwon: Former AFC Champions League winner Kwak Tae-hwi has admitted that he hopes to create more memories as Korea Republic's Gyeongnam FC get set to make their tournament debut at home to China’s Shandong Luneng in Group E on Tuesday.


The vastly experienced 37-year-old defender captained Ulsan Hyundai to the AFC Champions League title in 2012, scoring the first goal in a 3-0 victory over Saudi Arabia’s Al Ahli in the final, as they completed a stunning run of nine victories in a row to be crowned kings of Asia.

Kwak, who joined the Changwon side prior to the 2019 campaign, then finished as a runner-up with Al Hilal in 2014, and, more recently, was part of the FC Seoul team that eliminated Tuesday’s opponents at the quarter-final stage in 2016.

“I really do have great memories of the AFC Champions League and I’m glad Gyeongnam have qualified for the competition,” said Kwak, who also finished as a runner-up with Korea Republic at the 2015 AFC Asian Cup.

“It’s the first time that most of the players have played in the tournament, so they will find out that it’s very different from our domestic league.

“I’ll definitely help them by letting them know about my experience over the years, but the most important thing is how we prepare for the matches. Our aim is to create more good memories for the club.”

A post shared by 경남FC(Gyeongnam FC) (@gyeongnamfc) on Jan 8, 2019 at 6:58pm PST Another player with AFC Champions League experience, Lee Yeong-jae, has emphasised the importance of picking up three points in their home matches ahead of the clash with Shandong.

Lee helped Ulsan reach the Round of 16 last year, scoring two goals in the group stage. The midfielder then teamed up with Gyeongnam ahead of the 2019 season after the Changwon side enjoyed their best ever season in 2018, finishing second in K League 1.

They will now take their place in Asia’s premier club competition for the first time where, in addition to Shandong, they have been drawn alongside defending champions Kashima Antlers of Japan and fellow newcomers Johor Darul Ta’zim of Malaysia.

“The most important thing is that we can get three points from our home matches by producing solid performances,” added the 24-year-old.

“If we do that, then it will be the away games that decide who qualifies [for the next round] so we’ll need to adapt quickly to different conditions, such as the weather and pitches, and try not to lose when playing away.

“As a player who experienced last year’s AFC Champions League, my opinion is there is not too much difference in the quality of the players from each team.”