VIDEO: 20-year-old prostitute shares story of how she got pregnant for her own dad at age 14 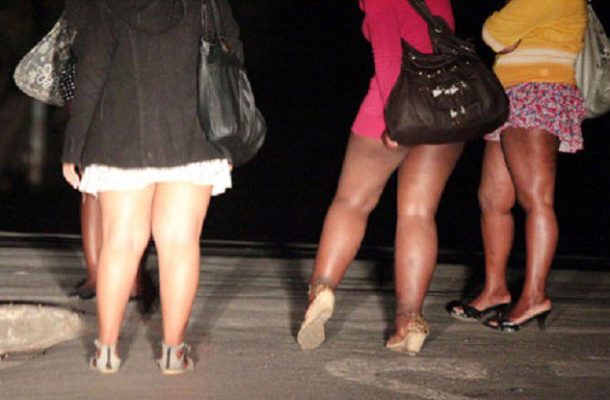 A 20-year-old prostitute has shared a distressing story of how she got pregnant for her biological father when she was 14 years.

Abena (not her real name), a resident of Tema appeared on SVTV Africa to disclose that it was actually her dad who disvirgined her.

She still struggling to come to terms with the fact that she was defiled severally and impregnated by her own father and currently has a five-year-old child being the result of the sexual escapes of the man in question.

She narrated that it all started when her father started under the guise of taking her through sex education and in the end, took undue advantage to get her laid multiple times, a situation that has left her with severe abominable pains and other complications she has been battling with till date.

“It is because of my father that I’m in this situation and engaging in prostitution. My dad started having sex with me when I was young at about eleven or twelve years old. As at the time we came to Tema community 9, I remember he offered to teach me and if I don’t understand anything, he punishes me by sleeping with me but I couldn’t tell anyone what my dad was doing because he threatened to beat and kill me if I told anyone.”

She revealed that this persisted until she became pregnant at age fourteen.

“At age fourteen, I became pregnant. When I told my father, he asked me not to tell anybody promising to help me to abort. He gave me some concoction but I refused to take it and told him I’ll reveal the secret but he threatened me if I did.  He warned that he will take me to the Prampram Sea and kill me there if I dared reveal the secret so out of fear, I didn’t tell anybody. He then sent me to his friend’s place in community 8.” She stated

Abena revealed that she gave birth in the six months of pregnancy, unlike the normal nine-month journey. She pointed out that, her son eventually died after breast milk started oozing out of his nose suspecting the father may have been behind what happened

After the death of her son, Abena disclosed that she continued the horrendous ordeal in the hands of her father as she was sometimes maltreated and chained to prevent her from going out. After some time, she realized she was pregnant again.

One thing led to the other and Abena eventually had to resort to prostitution as a means of survival.

Watch a video of her story below: