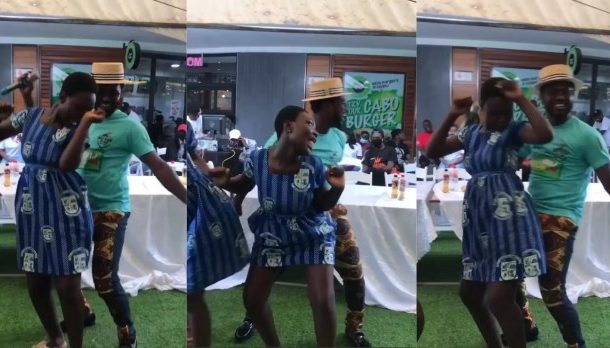 Popular Ghanaian radio ppresenter Abeiku Santana of Depite Media Group is the subject of social media troll for grinding the backside of an SHS student of Achimota School.

In a viral video, the presenter is seen dancing with a group of Achimota student girls and grinding one of them with Kwame Eugene popular song enjoyment.

The said video is believed to have been recorded on Friday at the Achimota mall when the presenter held his afternoon show from the venue.

It was to mark Black Friday which saw many shops across the country drastically reduce the prices of their wares and commodities.

At the said event, a lot of artiste such as Dope Nation, Article Wan and some others passed through the program.

There was a performance from the gathered crowd with some of them singing and performing some popular songs.

It was during the dancing session that some girl from Achimota school decided to showcase their twerking skills which Abeiku Aggrey joined grinding the back side of the teenager.

The video has generated a lot of criticism on social media as some are saying he should know better than grinding the ass of a little girl.