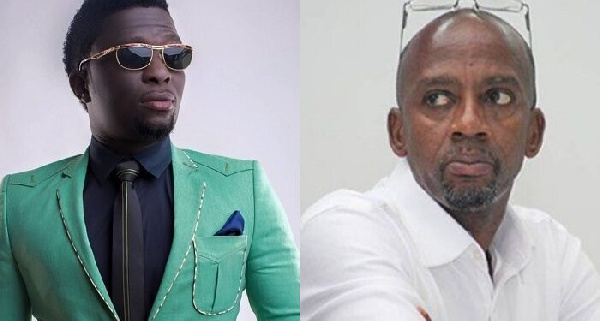 Ghanaian musician, Akoo Nana has attacked Rex Omar for leveling allegations against Ghana’s President, Nana Addo Dankwa Akufo-Addo for misusing state funds on private jets.
In a video sighted by Zionfelix.net, Akoo Nana said the Board Chairman of the Ghana Music Rights Organization (GHAMRO) has no moral right to disrespect the President on radio.

He averred Rex Omar has failed as a leader and he is doing the same thing that he is accusing the President of doing.

Akoo Nana alleged Rex Omar has misappropriated a lot of funds and he needs to be investigated.

Before taking the GHAMRO job, the musician claimed Rex Omar was using a small car ‘Renault Clio’ but he now owns a lot of cars.

He disclosed that the expenses of GHAMRO are more than the royalties they are paying Ghanaian musicians.

The ‘Amponsah’ composer said Rex Omar’s claim that he is not taking a salary is not true. According to him, Rex Omar takes a salary and receives other incentives.

He said Rex Omar will not be respected if he is not giving the same respect to the President.

Akoo Nana reiterated that GAMRO is money squandering entity and such attitude should not be condoned.