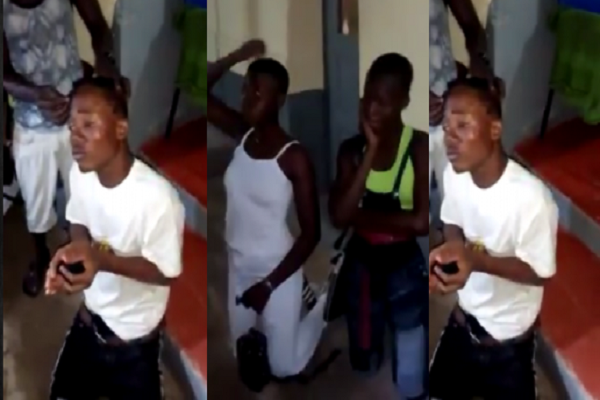 With barely one month after a Magistrate court in Enchi sentenced six men for mercilessly flogging a young man, another video has emerged of which some palace guards are seen abusing young adults at the Omanhene's palace.

In the latest video which is already circulating on social media, the palace guards are seen giving a disgusting headcut to the young men and women.

The offences committed by the young adults are not immediately known but in the video, disgusting head shavings were being slashed on them as their punishment.

It would be recalled that a video of a young man, Stephen Koomson being beaten by four men for allegedly flouting the directives of the Paramount Chief of Aowin Traditional Area went viral on social media a fortnight ago.

He was said to have been flogged on the others of Nana Beyeeman Tano Kwaw Benbuin III, but that assertion has been denied by the Omanhene who claimed the action was not sanctioned by him as he had no knowledge of it.

But a deep throat source available to Ghanaguardian.com indicates the Omanhene has ordered that any child of school-going age who would be seen on the streets on Aowin land at night should be punished.

The source explained that the chief's new laws are aimed at restoring quality education in the Aowin land.