VIDEO: Be a ‘bedroom prostitute’ to your husband – Woman counsel to newly wed daughter goes viral 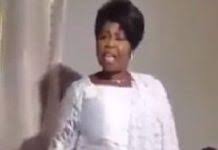 A video of a middle-aged woman advising her daughter during her engagement day has gone viral on various social media platforms.

The ‘bold woman’, spotted in a 2 minutes video was seen offering an advice publicly to her daughter on how to have good sex with her husband, in order to keep him crazily in love.

The video which is gaining huge attention on social media, has as well attracted applause for the mother who told her daughter to be a “bedroom prostitute” for only her husband.

The 'Bold woman' has earned praise on social media for not shying away with an advise that is essential in marriages.

The woman who was practically teaching her daughter how to keep her man and sustain the marriage, publicly encouraged the young lady to offer her husband different sexual positions in bedroom.

“As for cooking, we have taught you very well. So you won’t disappoint, but the other one. Learn new ‘bedroom skills’ every week or even a month to display for your husband from all angles,” the woman counseled the daughter in Twi.