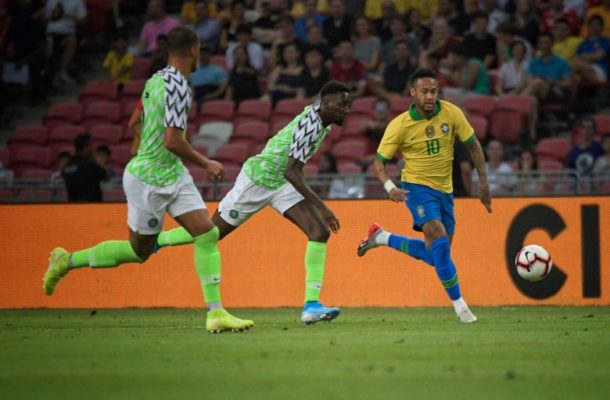 A bright and entertaining friendly at Singapore's National Stadium ended all square as Brazil and Nigeria played out a 1-1 draw.

The Super Eagles took the lead against the run of play with Glasgow Rangers striker Aribo quick to react in the Brazil box lashing home in the 35th minute as Marquinhos dawdled.

Brazil were soon level shortly after the interval when Casemiro stabbed home the rebound after Maquinhos had headed off the woodwork.

The draw sees Brazil now failing to win a match in their past four outings with the major concern from the Seleção perspective being Neymar limping off in the 12th minute of the action.

Brazil then peppered their African opponents' goal with shots as substitute Richarlison struck the woodwork twice, while both Nigeria goalkeepers - Francis Uzoho and debutant Maduka Okoye - also made crucial stops to deny the Selecao.

The five-time world champions knew it was not to be their night when Coutinho's goal-bound shot was miscleared by Semi Ajayi on the line and into the grateful arms of Okoye in the 86th minute.

Samuel Chukwueze then fired straight at Ederson from a tight angle in the next minute, but world No. 34 Nigeria will be pleased with their first draw against Brazil after a 3-0 defeat in 2003.