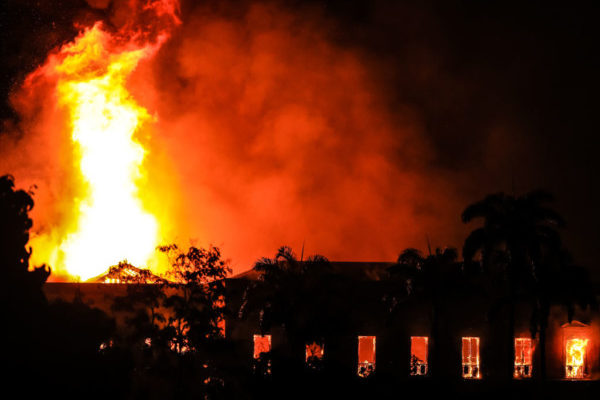 Brazil’s national museum, it’s oldest and most historical, has gone up in flames.

According to Guardian, the fire started Sunday night, while it was closed to the public, and the loss suffered has been described as “incalculable.”

Collections of over a 100 years have been lost in the fire, one of the museum’s vice directors Cristiana Serejo, has said.

It was the biggest natural history museum in Latin America. We have invaluable collections. Collections that are over 100 years old.


Its collections include a meteorite found in 1784 and “Luzia,” a 12,000-year-old skeleton, both of which has been lost in the fire.

This was Rio’s Museu Nacional before tonight's fire. Reports are that it was entirely destroyed in little more than an hour. That something like this could happen to a building of this importance is a staggering institutional and governance failure. pic.twitter.com/mwWAHqEftD
— Incunabula (@incunabula) September 3, 2018


It’s unclear how the fire started, and Michel Temer, the country’s president, tweeted:


The tweet reads; "Unforgettable for Brazil is the loss of the collection of the National Museum. 200 years of work, research and knowledge have been lost. The value of our history can not be measured by the damage to the building that housed the royal family during the Empire. It's a sad day for all Brazilians."

There have been no reports of injuries or deaths as the fire occurred while the museum was closed.

See a clip of the fire incident: