VIDEO: Drama as two politicians fight in church over control of constituency 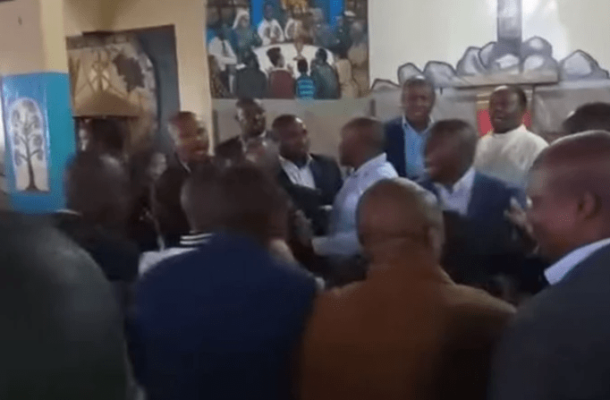 Two Kenyan politicians and members of parliament, Ndindi Nyoro and Maina Kamanda engaged in a fight yesterday at Gatui Catholic Church in Muranga over the control of Kiharu constituency.

The fight ensued after Nyoro stormed the church's fundraiser which Kamanda was attending with other Kieleweke MPs.

Nyoro disrupted the event, insisting that he is the only one with the right to invite leaders to events in his constituency as Kiharu's MP.

“I am the MP and I am the only one who can invite people to functions in this constituency. I respect Maina Kamanda as a father and an elder, but I cannot allow him to come all the way from Nairobi to rule Kiharu Constituency,” Nyoro said.


He also stated that the event will not go on because he wasn't invited to the event holding in his constituency.

A viral video shared by Nation captured moment the two lawmakers engaged in a shouting match at the event attended by about 20 members of Parliament, before reaching for each other's clothes.