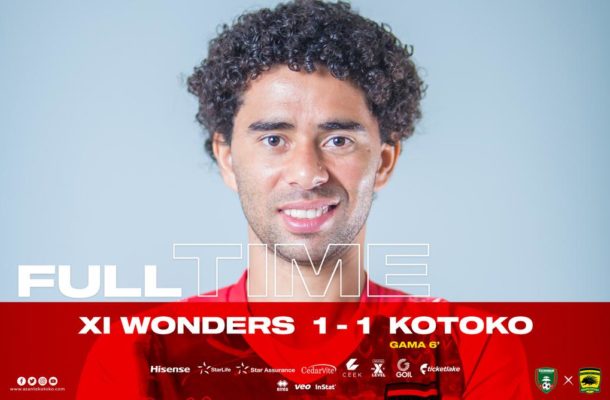 The porcupine warriors were quick off the block as they stormed to an early lead after a brilliant goal from Brazilian import Fabio Gama.

It was the first goal for the nimble footed Brazilian playmaker who drove from the center circle before unleashing a right footed belter to open the scores for Kotoko in the 6th minute of the game.

The home side after conceding the goal settled into the game as started posing problems for the Kotoko back line as they pressed for the equalizer.

With six minutes to end proceedings, Samuel Boakye who was posing problems for the Kotoko backline pulled parity with a brilliant header.

Both sides went into the break level with a goal apiece as it was a deserving scoreline as both teams cancelled each other out.

In the second period, the home side were the better side and had chances to have won the game but spurned all with Samuel Boakye the tormentor in chief.

Kotoko also had their moments as Augustine Okrah nearly scored an exquisite goal but neither side was able to get the winner as both sides settled for a draw.