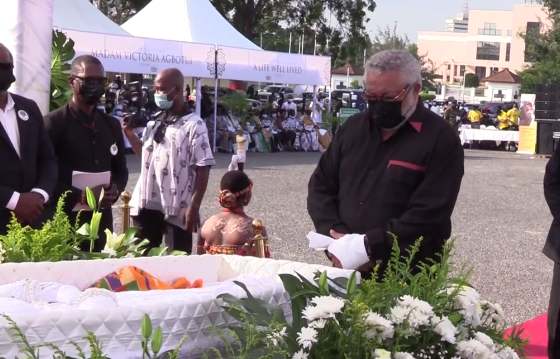 The funeral service which was held at the Forecourt of the State House in Accra was well-attended by NDC members, government officials including President Nana Akufo-Addo and wife Rebecca Akufo-Addo, Vice president Mahamadu Bawumia and several other dignitaries.

Mr JJ Rawlings who was accompanied by some individuals to file past his mother's mortal remains held on to her coffin and stared closely at her for a short while.

Though unclear what exactly that meant, it is evident that the former president has been deeply struck by the death of his mother.

Meanwhile, Madam Victoria Agbotui’s mortal remains will be conveyed to the Keta School Park in the Volta Region for burial service, then to Dzelukope for private internment.

She was once the head of the catering department at the presidency during former president Rawlings’ era.

She left behind four siblings and three children.

Watch the video below
Ghanaweb