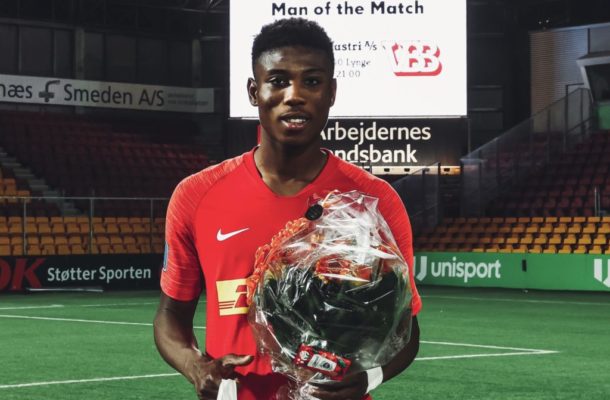 Ghanaian teen sensation, Francis Abu has won the goal of the month accolade in Denmark's elite league with his impressive curler against FC Midtjylland last week.

He scored a brace for FC Nordsjælland in their 4-1 win over Danish Champions FC Midtjylland during match day 7.

The Ghanaian youngster started the assault on the Danish league champions by scoring the opening goal of the match in the 11th minute at the Right to Dream Stadium.

He added another goal as half time approached with a thumping goal to to give his side the lead as FC Midtjylland had pulled parity through Anders Dreyer in the 34th minute.

Its his second goal against Danish Champions FC Midtjylland that has landed him the best goal award in the Danish league.

18 year old Francis Abu will be given the award when the FC Nordsjaelland host Velje on Sunday, November 8, 2020 at the Right to Dream Park.