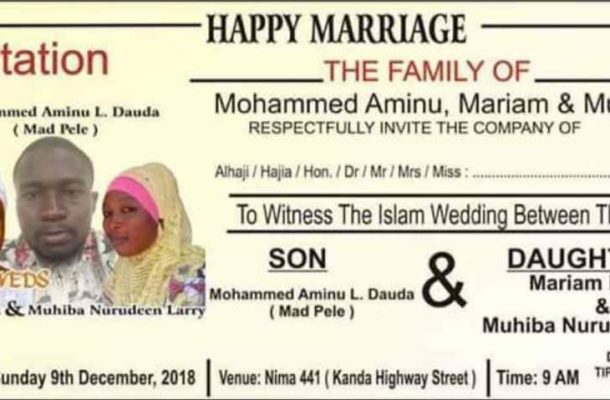 A Ghanaian man, nicknamed 'Mad Pele', has gained global fame for marrying two women on the same day and at the same time in a heavily-attended ceremony in Accra, Ghanaguardian.com can exclusively reveal.

Mohammed Aminu Dauda tied the knot with Mariam Musah and Muhiba Nurudeen Larry in one romantic Islamic ceremony on Sunday in the sprawling suburb of Nima in the Ghanaian capital.

Hundreds of people from all walks of life attended the heavily-publicised polyamorous event involving three families after the invitation cards of the wedding appeared on social media.

Friends and families of the brides and bridegroom watched in pleasure as the Imam at the Hot Coffee Mosque presided over the ceremony before declaring the trio married to loud chorus of ‘Allahu Akbar’ – which means God is great at the Islamic ceremony.

Excited wedding guests sprayed the trio with cash and gifts as they posed for pictures after the religious leaders officiated the ceremony amid loud cheers, thundering rounds of applause, singing as well as best wishes.

Some wedding guests could be heard saying ‘May God grant you a successful and peaceful marriage’ in the Hausa language – a saying common when people get married among Muslims in West Africa.

The brides and the groom were dressed in the same white attire designed by one fashion designer as the trio sought to paint the true picture of justice to be displayed in polyamorous relationships as spelt out according to Islamic marriage dicta.

The bridegroom, who is a businessman and a division two football club owner, said the two women will live in two different modest homes as they plan to raise children with Islamic values.

Mohammed said his wedding is a good example not only for Muslims but also for non-Muslims who are seeking to legitimize relationships with women insisting several ladies are cheated and deceived by men in recent times.

“I was speaking to the two women at the time so when it was time to marry I did not want to disappoint any of them so we all decided to start with fairness as spelt out for Muslims. This is a good example not only for us young Muslims but also for people of all walks of life,” Mohammed told Ghanaguardian.com.

“It is now commonplace to find a man dating perhaps two or three ladies at the same time. When it comes to marriage some ladies will be hurt. It’s time to be honest and open and for Muslims us this is permissible.

“We should be able to marry women knowing that a disappointed lady won’t come with her friends to disrupt the wedding ceremony. That’s why security budget is top of the agenda in most wedding ceremonies in Africa.”

Mohammed added that men must discard the idea that polygamy is archaic insisting it is more needed in society today than ever before citing statistics showing that women outnumber men by far.

“Today in Ghana, in Africa and indeed the world most married men have sidechicks. The wives and even the sidechicks are being cheated by these men and dumped whenever they want. The men should be honest and come forward and marry them. It is the honourable thing to do,” he said.

“It is a proven fact that women outnumber men so if we are ready to date them we should be ready to marry them. Our traditional laws allow its, Islam limits it to four women per man and many Christian pastors in Ghana say polygamy is allowed in Christianity according to the Bible – the limitation is a Western imposition on Christianity. Let’s be fair to our women.”

The trio is unlikely to become the first trio in Ghana to tie the knot at the same event and on the same day after spending years in love.

Three people are legally allowed to marry each other in Ghana, where polygamy is allowed for traditionalists, Muslims and Christians. The marriage ordinance act allows commonly called ‘white wedding’ allows a man to marry only one wife. All the religions are also allowed this type of marriage.