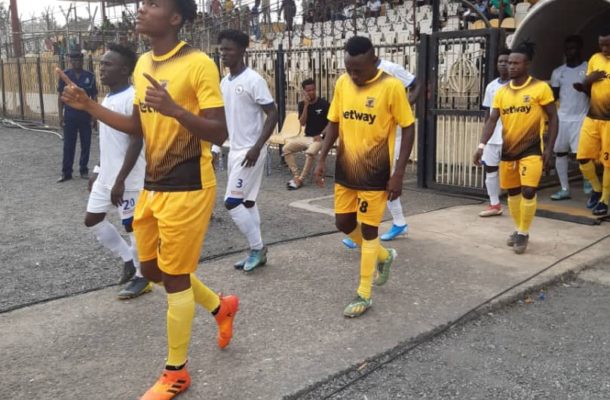 Giant slayers Berekum Chelsea continued where they left off against Kumasi Asante Kotoko by going to Obuasi to beat Ashantigold who had not lost a game.

The miners had won all matches played at the Obuasi Len Clay stadium with their only dropped points coming in the midweek clash with Legon Cities.

Chelsea have now won in Accra against Hearts of Oak,in Kumasi against Kotoko and in Obuasi against Ashgold proving that their good form is no fluke.

But much of the credit for Kofi Owusu's goal should go to Ashgold's goalkeeper Frank Boateng who gave the striker an absolute gift of a goal even when Christmas was over last month.

Danlad Ibrahim sent a long punt up-field and the Ashgold defenders failed to deal with the cross as their goalie came out to pick the ball he dropped it at the feet of Kofi Owusu who said a big thank you and nodded it home for what proved to be the only goal.