VIDEO: Inside the new Ghana national mosque whose completion has delayed since 2016 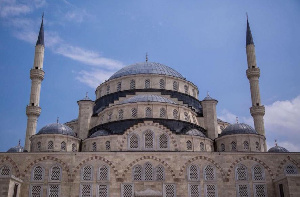 Ghanaian Muslims are readying to worship in the new $10 million ultra-modern national mosque built by the Turkish Hudai Foundation in Accra with the support of the Turkish government.

The 15,000 seater-capacity mosque complex built on a 40-acre land at Kanda has ancillary facilities including a library complex, office and residence for the Chief Imam, research complex, a senior high school complex, a clinic, an administration block, an auditorium, and a conference center.

The complex has been in the completion stage since March 2016 when former president John Mahama promised it would be finished in the next two or three months during the visit of Turkish President Recep Tayyip Erdogan to the country.

In February 2017, Vice President Dr. Mahamudu Bawumia also promised an end of year completion of the mosque during an inspection of the construction in the company of the National Chief Imam Osman Nuhu Sharubutu and other Muslim clerics.

Now scheduled to be opened to the public in 2020, the mosque in its incomplete state is a beauty to behold and qualifies to be one of the must-visit national assets in the country.

Through the lenses of Alex Tackie, a filmmaker and photographer who was commissioned to document its beauty, GhanaWeb gives you a glimpse of what will soon be one of the busiest locations in Accra in the next century and over.

Watch the video below:
Source: Ghanaweb.com