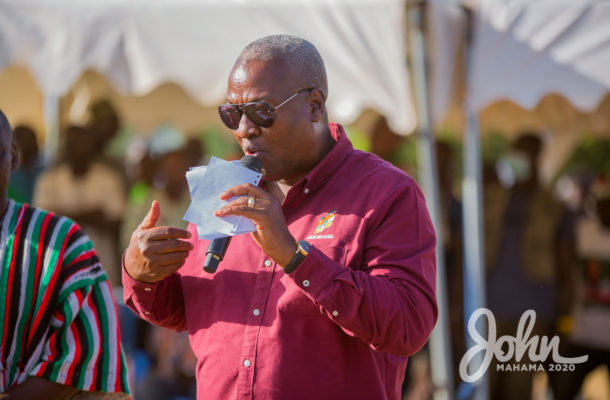 Presidential candidate of the opposition National Democratic Congress (NDC), John Dramani Mahama on Sunday celebrated his 62nd birthday with the workers and patients of the Tamale Teaching Hospital.

A large crowd converged at the premises of the Tamale Teaching Hospital to catch a glimpse at the NDC flagbearer during his birthday commemoration.

The former President who is seeking re-election made various donations to the Children's ward and other facilities within the Hospital.

He was accompanied on the visit to the hospital by his wife Madam Lordina Mahama who helped in cutting   the birthday cake and sharing among the children on admission.

In his address to the staff of the hospital, he promised to revamp the facility befitting of a teaching hospital which serves the whole of the Northern belt when re-elected.

“There is much more that we must do to bring it up to scratch so we can make it a foremost teaching hospital in the whole of the Savannah area of this country,” he said.

The CEO of the Tamale Teaching Hospital, Dr Abass Adam on his part wished the former President a happy birthday, thanked him for his kind gesture and deciding to celebrate his birthday with them.

According to the CEO, his visit will help children on admission there recover faster as they have been overwhelmed by his gesture.