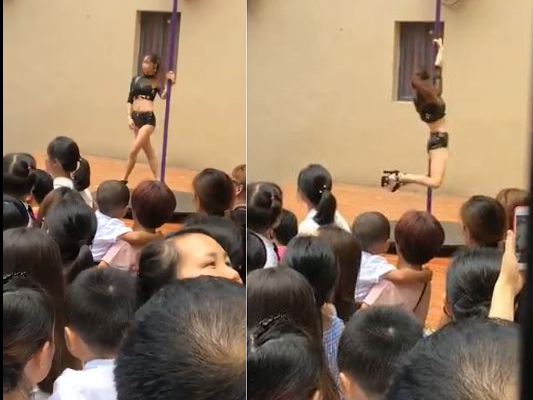 A Kindergarten school in the southern Chinese city of Shenzhen has caused an outrage after they hired sexy pole-dancers to welcome children back to school from holiday.

According to reports, the performance took place on Monday with parents of the children also in attendance to witness the government-mandated programme marking the start of China's school year.

The local education bureau has since called for the dismissal of the kindergarten director after the now viral video surfaced online.

In a social media post, the education bureau of Baoan district also warned other kindergartens against inappropriate behaviour.

"Pole dancing is by nature sexy and flirtatious, and by that measure, it is for the eyes of adults, not young children," said an anonymous user on Weibo, a popular Twitter-like microblog in China.

"Well, I'm speechless. Pole-dancing could be an Olympic sport in the future. It's an art form. Should it be denounced because performers don't wear much? Do you cover your eyes when you watch diving events and figure skating?" said one user.

"Is that a flag pole? If it is, this problem's serious," another Weibo user quipped.

Watch the inapropriate video below.

More from the opening day of our kids' kindergarten. Crazy. We're trying to get them out of there and get our tuition back. They also had a bunch of adverts out for a pole dancing school. Most likely paid the principal to put them up. pic.twitter.com/fgU946hFwn
— Michael Standaert (@mstandaert) September 3, 2018