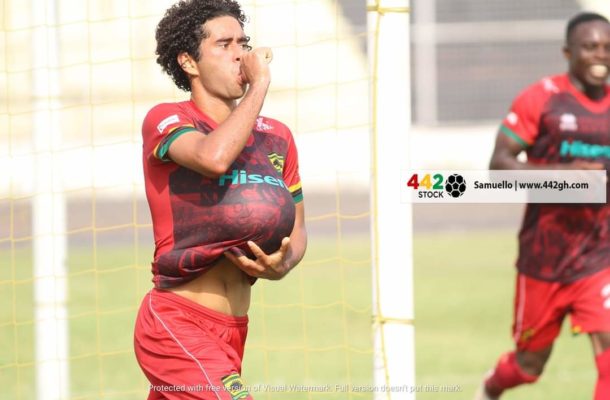 Kotoko's Brazilian import Fabio Gama Dos Santos has this afternoon scored his second goal for the club after scoring his first goal last Saturday in Techiman against Eleven Wonders.

Ishmael Abdul Ganiyu gave the host the lead in the 12th minute of the game before the skillful Brazilian added the second goal after being teed up by Andy Kumi before unleashing a fierce shot into the bottom corner of the net to double Kotoko's lead.

After scoring the goal the Brazilian dedicated the goal to his pregnant wife Aniele Ribiero who is carrying their second child.

Two more goals from Andy Kumi who made his home debut and another Brazilian import Michael Vinicius has give Kotoko a hefty 4-0 lead.

Kumasi Asante Kotoko are currently thumping the Bechem based side at the Obuasi Len Clay Stadium with the Porcupine Warriors leading by 4-0.