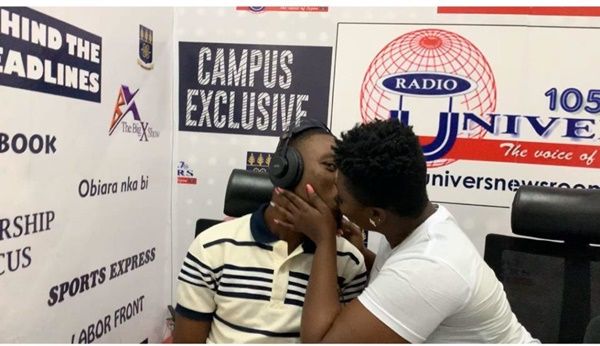 Kumawood actress, Safina Haroun isn’t one person to dare. The actress responded to a dare and boldly locked lips with a panelist during an interview session with Zionfelix on Radio Univers.

Safia told Zionfelix on the ‘Uncut show’ days ago that she freely kisses and spanks her female friends in the movie industry.

She denied having lesbian tendencies but confessed to kissing Louisa Adinkra, Abena Ghana and Tracey Boakye.

According to her, the act of kissing is just something she simply loves. This admission prompted host Zionfelix to dare her to kiss one of the panelists; a challenge she readily accepted.

Safia boldly kissed the said young man live on air much to his delight.

Safia Haroun’s movie, “The Taste Of A Woman” will be premiered on 5th October 2019 at Snap Cinema in Accra.