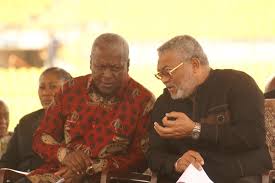 The tension between Former Presidents, Rawlings and Mahama, was manifested when the two publicly snubbed each other at the Independence square.

Rumours of the Former Presidents possibly reconciling seem to have been thrown away as the two rarely exchanged pleasantries when they met at the 25th Anniversary of the 4th Republic.

Mr. Mahama, who was standing while exchanging pleasantries with dignitaries at the event, warmly shook hands and hugged Former President Kufuor.

However, the issue was nott the same when it got to President Rawlings. The two shook hands with each other without exchanging a word or eye contact.

The video has reaffirmed the rumour of bad blood between the two.