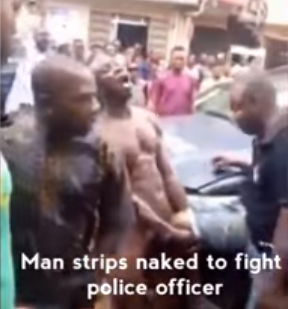 A naked man was caught on tape fighting a police officer while residents gathered round to cheer him on.

According to reports, the incident happened in Ikorodu, Lagos.

In the 1 minute video, the naked man can be seen walking up to a police officer and goading him to fight. A fierce combat broke out during which the man managed to knock the officer to the ground.

This elicited a loud cheer from onlookers. They were locked in each others arms for a while before the naked man managed to get hold of one of the uniformed officer's legs and held on firmly while the policeman tried to free himself.

Another police officer is seeing in the video trying to separate the fight but was not successful.

See the embarrassing video below...