VIDEO: Man wants to divorce wife for farting too much in Kumasi 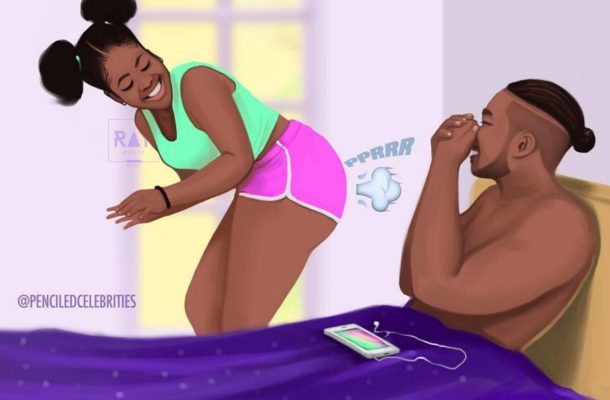 A couple in Kumasi are considering divorce after accusing one another of excessive and uncontrolled farting.

The male partner in the 10-year-old marriage has accused his wife of excessive farting, an attitude he said was unbecoming of her.

The man who appeared on Nhyira FM‘s ever popular show, Obra, with his wife told show host Mama Effe that the uncontrolled rate of flatulence had become a major source of argument in their relationship.

Narrating her side of the story on the show, the woman who gave her name as Vida said she recently moved into a new apartment with her husband who had given her prior warning against farting in their new home.

In spite of the warning, however, Vida’s uncontrolled farting continued, resulting in arguments that have put the marriage on the verge of a break up.

But, as the show progressed, it become apparent that Vida’s husband also had a penchant for farting.

To justify his act of farting, however, the man said his wife feeds him with gaseous food very late and that may be accounting for his release of gas sometimes.

She told me that she’s been married for four years before our marriage but has never heard or seen her ex-husband fart but the problem is that she serves my food very late in the night, sometimes around 7:30 pm,” Vida’s husband narrated .

The visibly unhappy husband questioned his wife’s rationale for bringing the issue to Mama Effe’s show, saying it was pointless.