VIDEO: My fight with Davido was bigger than Abacha’s - Dele Momodu 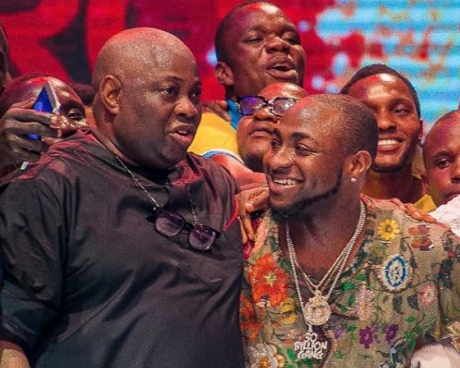 Veteran Nigerian Journalist/Politician, Dele Momodu has revealed his publicized feud with popular Nigerian singer, Davido was the biggest ‘fight’ of his life.

The two who squashed their 2-year old beef last December when the singer came to perform at the 10th edition of 'Ovation Red Carol' organized by Mr. Momodu had a huge    social media fight when Dele Momodu’s cousin and Davido had a child together.

Reminiscing on the fight and all that transpired, Dele Momodu has now said, 'fighting Davido was bigger than combating Abacha'.

“Fighting with David was my biggest battle ever. It was bigger than fighting Abacha because of the blistering popularity of David; he is an extremely popular guy and it was very unfortunate, (the devil is a liar) because a baby was involved; very beautiful girl, Imade. When it happened, I tried my best to avoid a collision with the family because I am very close to the family especially because of Senator Ademola Adeleke. We used to sleep in the same house when I was in exile in London. Whenever Sen. Ademola was around, he would call me and then pick me up to his house and I’ll sleep there and when I need to go back to my own house he would drop me.”

“So when the baby issue came, I didn’t know about it, if Sophie (Davido’s first Babymama) didn’t tell me she was pregnant, I wouldn’t have known, she was able to hide it perfectly from everyone" he said.

See the video below...