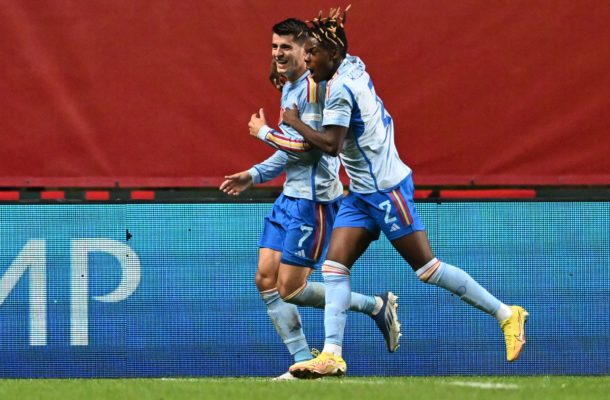 Nico Williams provided the assist for Alvaro Morata's winner two minutes from time in their 1-0 win over Portugal in Braga in the UEFA Nations League.

The 20-year-old Athletic Bilbao winger was introduced into the game in the 73rd minute as a replacement for Ferran Torres in only his second game for Spain.

He headed down a long ball from Carvajal into the path of Alvaro Morata who smashed home into an empty net to send Spain into the semi-finals of the UEFA Nations League.

Nico Williams who is the younger brother of Inaki Williams chose to represent Spain where he was born while his senior brother who was overlooked by Spain after one cap has now decided to play for Ghana and played on Tuesday night against Nicaragua in a friendly match.

Spain finished top of League A-Group 2 on 11 points from six games, one point above second-placed Portugal who only needed a draw to secure a spot in the semifinals.

The Spaniards join Croatia, Italy and the Netherlands in next year's finals tournament.