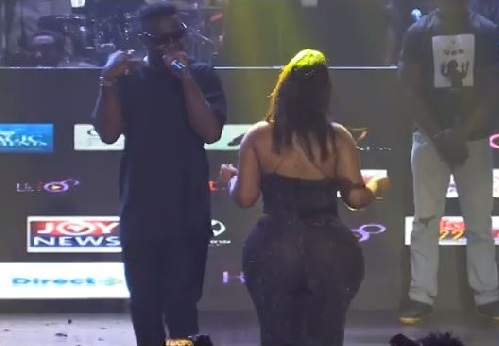 Music legend Obrafour and his 'son' Sarkodie distanced themselves from Moesha Boduong when the actress with a heavy backside joined them on stage during the performance of their 'Moesha' track at the Pae Mu Ka @20 concert.

The two rappers stayed off while Moesha gyrated to the admiration of the audience.

Pae Mu Ka @20 was held at the Accra International Conference Centre on Saturday.

It was a night to celebrate 20 years since the release of his ‘Pae Mu Ka’ album - a piece by Obrafour many have said is the best hiplife album of all time.

Among other things, they argue that the album produced by Hammer of The Last Two and released in 1999, laid the foundation for what has now become a source of livelihood for many in the music industry.

The event emceed by KOD with DJ Black as the official DJ saw performances from some of the aforementioned acts.