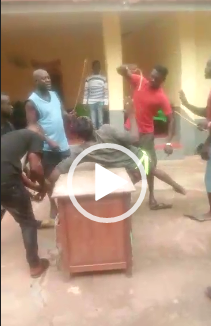 A video has surfaced the online space of which some palace guards in Enchi in the Aowin Municipality of the Western North region are flogging a teenager for alleged ‘stubbornness’.

It is alleged that Nana Tannor Kwaw Benbui II, who recently was installed as the Paramount Chief of the Aowin Traditional Area on Tuesday, March 30, 2019, has ordered the guards in his palace to be flogging teenagers who are seen on the streets of Enchi.

It is immediately not known what warranted the alleged orders by the Omanhene but a deep throat source available to this portal indicates he made the new laws in just 5 months after his installation as the overlord of the Aowin land.

The people of Enchi, especially the youth, seem aroused over the orders of the 38-year-old ruler who until his installation was based in the United Kingdon (UK).

In the viral video, the teenage boy (name unknown) is laid on a table and subjected to severe lashings by about 7 strong men.

One of the men in the video, identified as Agya Attah Krufie, a royal at the palace and a broadcast journalist, was seen pleading with the 'palace boys' to stop beating the young man, but the source disclosed he did so out of hypocrisy since he is fully in support of the king's orders.

Ghanaguardian.com's investigations have revealed that, other young folks in the Enchi township, have been ‘disciplined’ by the palace guards over the king's new orders. We gathered that a female nurse with the Enchi Prebitarian Health Centre was even beaten to a pulp by the guards upon her return to the house after closing from duty.

The boy cried in the Brossa dialect ‘nyelehwee’, which literally means 'I did no wrong'.