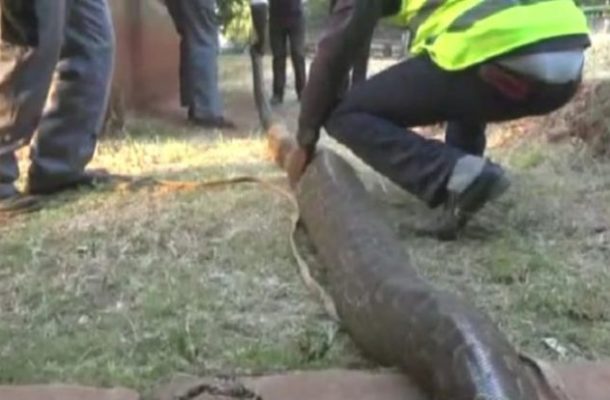 Residents of Molo Sirwe area in Mogotio Sub-County, Baringo County on Monday evening captured a 14-foot python and took it to the County Government offices in Kabarnet Town, where it was handed over to KWS officers.

It is alleged that the 100-kg reptile has been feeding on the residents’ livestock.

Knowing well how dangerous the animal is, the locals teamed up to capture it.

The exercise lasted five hours, with at least seven residents employing rudimentary methods, including the use of bare hands, to seize the snake.

The animal was last spotted in a thicket in Molo Sirwe, where it is alleged it was hunting for goats to feed on.

Inhabitants of Molo Sirwe, consequently, organised to have the 14-foot python captured alive and handed over to KWS for subsequent action. The decision was arrived at after the wildlife conservancy agency failed to heed the locals’ request to have the animal seized.

And, on Monday, November 4, the residents organised themselves strategically, and captured the animal after spotting it in a thicket in Molo Sirwe.

Attempts by the snake to constrict its captors were futile as the seven-man group managed to pin in to the ground by pressing its tail.

Collins Chepkochei, a resident, told K24 Digital that they tried as much as possible not to harm the reptile as they understood the importance of wildlife conservation.

Willy Chebet, another resident who took part in the exercise, said a majority of them did not have snake-trapping skills, and were depending on “little knowledge” to succeed in the operation.

After the animal was constrained, a well-wisher offered to transport it to the headquarters of Baringo County Government located in Kabarnet Town.

It was the captors who made that decision in a bid to communicate their frustration at the “lack of county government’s intervention” to solve the perennial human-wildlife conflict.

The snake was transported approximately 100 kilometers in the well-wisher’s pick-up.

Area Governor, Stanley Kiptis, wasn’t in his office during the incident.