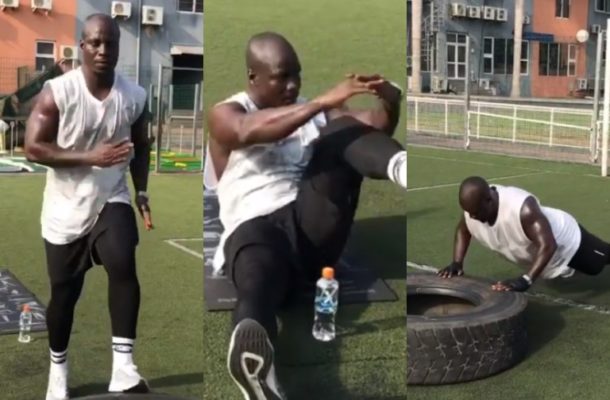 Former Black Stars captain, Stephen Appiah has exhibited one of his qualities that has kept him stardom after years of hanging his boots.

Being the main anchor in the popular celebrity workouts organised by Primival consults, the 39-year-old has released a new video covering his training regiments that kept fit over the years.

In the video he posted on his social media handle on Instagram, the former Black Stars captain was doing some heavy training, which makes him look like an 18-year-old.

His physical qualities during his boyhood days to the latter part of his career have been admired by many, who have likened him to the advertising character Michael Power.

The former Hearts of Oak star retired from active football after 17 years, in a career that spanned between 19195 to 2012.

After leaving Hearts of Oak in the late 1990s, Appiah's stock rose with spells at Udinese, Parma and Juventus before a move to Turkish giants Fenerbahce between 2005-2008 effectively halted his career.