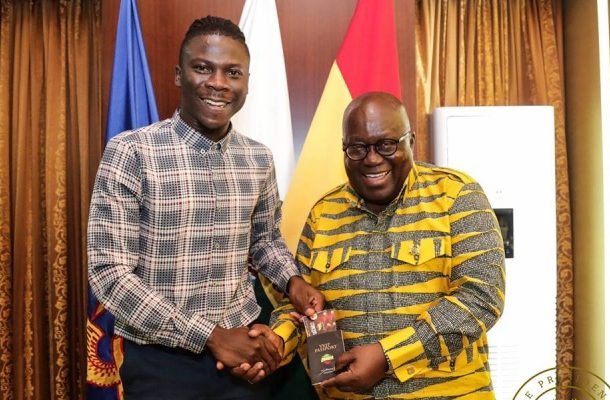 Stonebwoy with President Akufo-Addo at the Jubilee House

Multiple award winning Ghanaian Reggae/Dancehall star, Stonebwoy has extended an invitation to President Nana Addo Dankwa Akufo-Addo to his ‘Fill The Dome Bhim Concert’ which will take place on 28 December 2018 at the Fantasy Dome.Stonebwoy personally invited Nana Akufo-Addo when he visited the president at the Jubilee House on Thursday, 20 December 2018.

There's an immense pressure on the organizers of the BHIM concert to fill Fantasy Dome where the concert will be held after Shatta Wale massively filled the place during his album launch concert.

Shatta Wale who also has a show that very day has been mocking his label mate, indicating he will not be able to fill the dome as much as he did.

In a bid to create more publicity for the event, Stonebwoy has taken the extra mile to invite the first gentleman of the land where they also discussed the role of the entertainment industry in the development of the country.

“Afropop, dancehall and reggae artiste, @stonebwoyb, "President of Bhim Nation", was at Jubilee House a few minutes ago to invite me to his #FillTheDome Bhim Concert, which will take place on December 28, 2018, at the Fantasy Dome,” President Akufo-Addo said in a post on Instagram.

He added that, “We also discussed the role the entertainment industry can play towards the development of our country.”

“It was a refreshing conversation discussing the essence of the Creative Arts Industry and it’s impact on the overall development and image of country.

God bless you. @nakufoaddo ?,” he added.

The December 28 Fill The Dome Bhim Concert will feature several top acts like Morgan Heritage, Kelvyn Boy and a host of others.