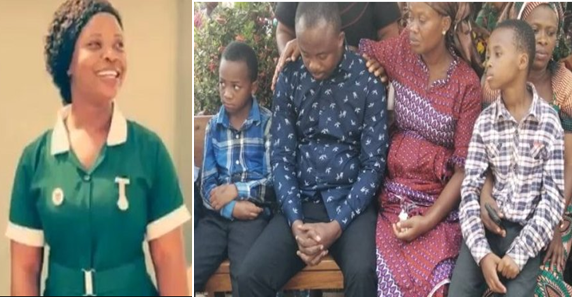 The family of the nurse murdered at Sewua in the Ashanti regional capital of Kumasi are calling for justice as Ruth Arhin is laid to rest, Saturday.

Other mourners and sympathisers, mostly from the health sector added their voices to the family’s calls for those behind the dastardly act to be brought to book.

Ruth Arhin, 37, was murdered a few metres from her house at Sewua.

The mother of three did not return home after closing from work on February 3, and was later found dead the next day.

Hundreds of sympathisers on Saturday, thronged the family house at Ayuom to pay their last respect.

The leadership of all the 13 bodies within the nursing profession were at the event to solidarise with their fallen colleague.

Parliament has called for swift justice and intensified investigation into the gruesome death of the nurse.

Dr Kwabena Twum-Nuamah, Chairman of Parliament Committee of Health implored the House to invite the Interior Minister to brief them on security arrangements for health workers, especially for those in deprived areas.

He further appealed to the chiefs and people in the area to volunteer vital information to apprehend killers.

Meanwhile, one person has been arrested in connection with the suspected murder after a phone found at the scene of the crime was traced to the unidentified suspect.