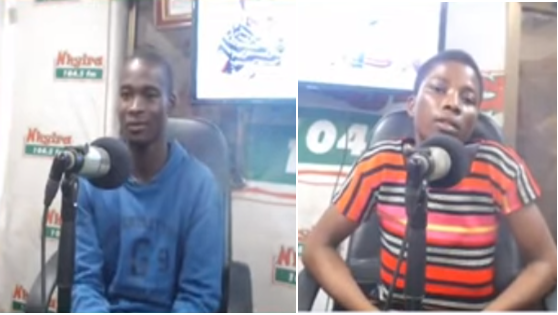 Two teen lovers, who hail from the Ashanti region, are at the verge of losing their lives and sanity after a blood covenant they made to secure their relationship.

Ama Agyemang,17, and Desmond Kwarteng, 19, sealed their commitment with a curse that any partner who has extra affairs should run mad.

Giving her side of the story, the Senior High School (SHS) student revealed she suggested the covenant out of love and empathy considering the financial help Desmond had offered her in the seven months of their relationship.

“When I was leaving for SHS, I wanted to assure Desmond of my love and I called him one night to suggest the covenant. I pricked his thumb with a needle and sucked out the blood and he did likewise. After everything we had sex to seal the commitment,

“After what we did in the house, we proceeded to the cemetery where we broke an egg and called on the river gods to bear us witness,” she narrated on Nhyira FM’s Obra.

Adding his voice, Desmond said he wants the covenant broken but will not leave their relationship because of his undying love for her.

However, both parents of the lovers are against the relationship. They said it amounts to incest because they are related and should be forbidden.

Should the pressure from the parents lead to a break-up of the relationship, the teen lovers may die or go mad because of the blood covenant.