Video: The teenagers whipped by Bishop Obinim speak out 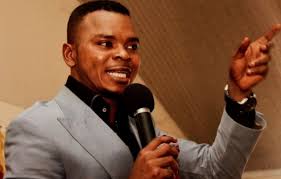 The boy and girl who are 16 and 14 years respectively during a live TV interview on OBTV both claimed to be feeling ‘stronger than before’ after a video of them being whipped in church by Bishop Daniel Obinim went viral.

Eliasu Zakari, the young guy said he together with his mum and siblings have been staying with the man of God for about eight years taking him through school and providing him with cloths. Justina Nhyiraba Gyasiwaa, the 14-year-old lady also disclosed that she has been with Bishop Obinim since age 10.

When asked if they were aware the video had gone viral, Eliasu replied in the affirmative and said he had received calls from abroad from friends inquiring about the video. Eliasu Zakari during the TV interview admitted that he slept with the young girl but hurriedly added that they did it just once.

Stating why she wanted to abort the pregnancy, the 14 year old told the host that she was afraid of Mr. and Mrs. Obinim. She revealed that she asked her sibling to bring her a medicine to damage the pregnancy but it did not work as planned.

The boy also went on to state that he was disturbed by the uproar of some Ghanaians claiming they were treated inhumanly, he said he had done wrong and was punished by his father and was happy to be corrected. He had some words of advice for the youth. The full video is above.

abdul rashid mamud oloyin 5 years ago
I careless about their stupid confessions,Obinim could have whipped or "corrected" them at home not on a live TV programme, its absolutely insane.